This crazy year had titles like Pulp Fiction and Shawshank Redemption. But everyone has seen them already, am I right? Even if I’m not, I’m just going to skip these super popular titles because why not. There are four movies from 1994 in IMDb top30, four!

Yup, this was definitely a good year, and even after skipping some obvious names, all these titles are getting a score of 9-10 from me. It also means that there were a bunch of great films with a score of 8.5 that didn’t make the list.

And why do I even categorize these? All these movies are rather praised, a bit weird, and more or less cult movies.

The beautiful yet horrible story of a small girl who ends up having nothing left but the strange man next door, who happens to be a hitman. This is definitely my favourite role of Natalie Portman ever, and looking back it seems that 90s had tons of great roles for little girls (or perhaps I just liked them). Jean Reno and Gary Oldman also give phenomenal performances in this Luc Besson’s masterpiece.

I don’t really need to say anything more, everyone should watch this movie.

Ha, you betcha there’s a Johnny Depp movie in here somewhere! I managed to skip one year so far. What can one do when the guy is this talented and picks such delicious roles? And it’s also another Tim Burton movie, a weird and funny one (like most of them).

Ed Wood tells about Ed Wood, a big surprise. He was the famous or rather infamous director of B-movies in the 50s. He was known as “The Worst Director of All Time” which in itself is an achievement. And while his works definitely were interesting to put it mildly, he obviously couldn’t be the actual worst director out there, because most of the bad ones never get anything done, and holy crap all the horrible stuff we can see in TV these days. Ed Wood had vision.

But I got sidetracked. The movie is brilliant, filled with layers and interesting characters portrayed by excellent cast. Johnny Depp is also at his best. 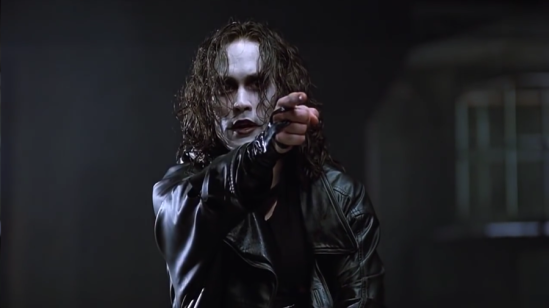 For some people the tragic death of Brandon Lee was more painful than the tragic death of Kurt Cobain. The rising star left an everlasting impression in this violent and gothic revenge movie. The legend of Crow goes so that it can bring dead back – to even the score (sadly that didn’t happen IRL). The story is based on a comic book by James O’Barr (I should still have it somewhere, I hope). The franchise got a bunch of sequels and even TV series, and they’re pretty okay TV stuff, but nothing to phone home about.

I consider Alex Proyas a somewhat underrated director. His movies tend to get some kind of weird critique sometimes. I know my scores aren’t exactly objective, but the nitpicking I’ve heard, sheesh. Not that this movie really got a lot of crap, it’s pretty well received, and for a reason.

So, this year ended up being pretty violent. Sorry? This also means that all these violent R rated movies might have unrated, uncut versions out there, and those are the versions people should go for. Even if it felt like an ode to violence. NBK kinda is that, but it isn’t really a glorification of it at all.

Mickey and Mallory are the modern Bonnie and Clyde, I guess. A couple on a killing spree. NBK is violent, strange, surreal and funny. It’s Tarantino’s story and Oliver Stone’s direction about a couple of dysfunctional anti heroes, told in weird bits and pieces satirizing American media and pop culture. It can also be enjoyed purely as a weird, psychedelic trip, if people prefer so.

If everyone didn’t quite get it yet, this is not a nice story.

Aww, look at the cute British youngsters there interviewing a roommate. So cute, and they’re funny too. But then their new roomie drops dead and leaves behind a lot of cash. And things are really not that cute and funny anymore. Less and less as the story progresses.

Shallow Grave is an excellent thriller, actually building up the tension without people running into abandoned houses getting cheap scares, and also sustaining the dark comical tones in it. Sometimes (well, often) the Brits just do things better: the characters feel more human and everything is not a cliche about a serial killer haunting the official sent after them (shush, I know Hannibal is great). Normal people getting dragged into the world of crime can be really interesting if done well.