I mostly play games with a strong narrative but now and then I feel like passing the time with a good strategy game, usually involving building and managing something. I really loved the settlement campaigns on Settlers IV Gold so when I noticed Banished, it seemed to be right up my alley: a medieval city builder without any enemy battles. Unless one counts battling against the nature.

Banished is a nice and simple lightweight game, and it does work pretty much like settlements in Settler games. It also manages to hook a player fast, though I think it won’t keep them interested as long as complex giants like Civilization for example. The game only has a few map parameters and after that there are no real goals. No massive campaigns, not even actual scenarios. But there are a bunch of achievements the player can set up as their goals, if they feel a need for incentive other than watching their town grow and live. Some of the achievements even require a certain map types to be completed.

The game has some basic tutorials but nothing that really goes deeper into how the townsfolk go about their business. The in-game written guides are pretty simple too. Most likely people will end up starving their colony before they notice certain important things in the gameplay. Famine and cold winter are fast killers, and especially the famine is something that once begun it never seems to end. Not even if every single person in the town is producing food. The player is lucky if there’ll be 10 people standing after the wave of famine finally ends.

The whole mechanic of famine is something that has acquired a lot of criticism, and I pretty much have to agree with it. People in Banished don’t share. A single woodcutter in his 40s comes to the warehouse and picks up 400 units of corn, and the rest of the families can starve for all he cares. If someone’s house is empty of food when they poke their head there, they’ll easily start running around like headless chickens, checking warehouses, visiting a herbalists or trying to find food from nature. Doing this silly run they can actually manage to starve themselves, even if the warehouses would get a constant flow of food – someone else just manages to pick them up, trying to fill their house with hundreds and hundreds of units, while others don’t have food at all. Also, if a person didn’t find food and continues their work, they have a very high risk of starving the further their work place is. Even food producers themselves starve bringing their food to the warehouse, where someone else picks it up.

Smartasses probably just say that it’s “working as intended” and explain how they never have problems with food supply, but let’s just be honest and admit that this food handling is not a good example of a clever AI. If there’s a fricking town with 5 houses and everyone’s a fisherman, there just is no community where one or two houses would be able to hoard all the fish and the rest just starve with zero food. It doesn’t happen. If somehow the rich would hoard the supplies and let the poor starve, that I could kind of understand.

But, I think the game is good enough to be played even with this silly aspect. There just always has to be a huge surplus of food and everything will be fine. If a town hall is built in the colony, the player can look at some production numbers and graphs. I highly recommend building it in early stages of the game, even though it requires a bunch of materials. Just being able to check how much resources are being used helps enormously when thinking about how to expand the town. 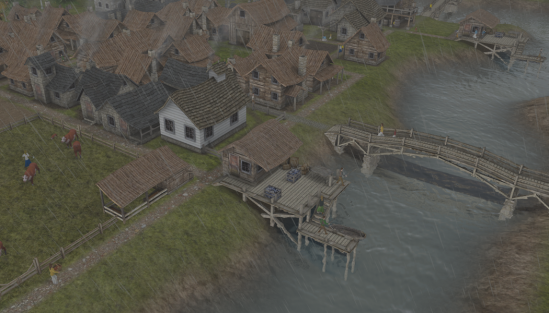 In addition to food people need other resources like firewood (or coal) to warm up their houses during winter, clothes to keep themselves warm when outside and tools to be able to work effectively. A trade post gets a regular visit by outside traders that offer various kinds of goods, including seeds for farming and livestock for pastures. Running out of some resources can be fatal like with food and firewood (though in the winter a small village survives just fine if there is just a single warm house they can visit) and then just annoying like with a shortage of tools, when it takes infuriatingly long time to accomplish any tasks.

The player decides what to build and where, including roads. The jobs of the residents are also determined by the player. It’s always a good idea to keep a few laborers as a reserve, as they will automatically fill the jobs that have openings (usually because of deaths). The residents are also rather flexible changing their jobs, anyone can fill any job, and the professions are even constantly changed by the living arrangements. The game’s AI tries to give the people a job closer to home, which kinda warms me up a bit inside.

The population can be controlled by housing. A children of the household will not start breeding until they can move into another house. This makes controlled expanding of the colony quite easy. If nothing else, people will eventually die of old age and free up a house for a new couple like this. It’s quite possible to see some heartwarming marriages of 30 year old guys and 10 year old girls. Building a school will stop child labour and marriages. I also assume educated people are happier and work more efficiently but that’s just my gut feeling. Another way to raise population is to accept wandering nomads as residents. They will start appearing now and then once the village meets certain conditions.

After failing miserably in some medium difficulty map I started over with all around easy settings and every went super fine until I decided to expand in bulks. I had like 90 farmers and 40 other food producers and only a few jobs doing anything else but I seemed to be sinking towards famine anyway. So I just gave up and started once more – with a feeling. No, seriously I managed to gain a bunch of achievements on that map before the sinking started and I really felt like going for the Mountain Men achievement instead of trying to desperately save the Boringsville I was playing.

Requirements for the achievement were to maintain a population of 50 people for 20 years in a small mountainous map with harsh climate. The game was on, this was serious business. I decided to expand veeeery carefully. I bought some expensive chickens that died the first winter and built a tunnel which made me run out of stones. Despite the slow growth, the famine hit. And it hit hard. I had that 50ish people and was left with 12 I think. Then I just grit my teeth and decided to make it. I made everyone produce food during summer and switched one person to woodcutting during winters, so that I could have a house or two to keep people warm. I traded leather and wool for more food until the village started to slowly work again. I still almost sunk into another famine because of the fast population growth (I didn’t want to tear down the empty houses) but I just barely made it, until I finally reached a stable settlement of 60 people and started getting overproduction in everything. Totally worth it.

My charming inbred mountain village. How quaint. Any of you watched or read ‘Les rivières pourpres’ (the Crimson Rivers)? I was totally pretending that was my village. There were no murders reported though, but maybe those bear-maulings and rock-crushings were just well fabricated?

After all my struggles – and successes too – I mostly feel that I’ve learned how to play this game a lot better, though it’s still very possible to fail. Thriving or struggling, the overall atmosphere is really nice. The player is able to follow the residents around, people who all have their own names, ages and occupations and who form new families. It’s perhaps not as cute as those little village games aimed for kids but adults don’t need cutesy stuff over some harsh (but sometimes also funny) realities, right?

During all my plays, one person actually got banished from my village. She was a school teacher who went crazy. It felt too real.