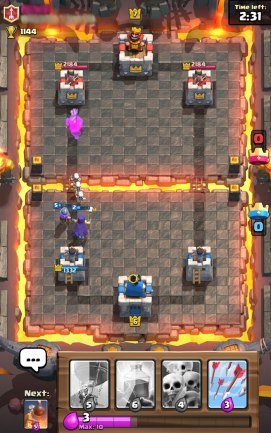 One of Supercell’s hit games is the addictive and frustrating Clash Royale. I never tried the earlier Clash of Clans which this game has a connection with, so I can’t compare them. Both of the games seem to be immensely popular though.

Clash Royale is a free-to-play real time strategy game with cards and tower defense. The player acquires some cards during the tutorial and can build different 8 card decks to try out in the arenas against other human players. There really isn’t single player options apart from the tutorial and practise mode, so one should be ready to deal with other people wiping the floor with them.

Leveling in the game is slow. Being in a guild helps, but as one could guess: money helps more. And like in many micro-payment games: the prices are flat out ridiculous. I can’t give a real estimate how important it is to boost things with money in the “end game” of sorts, as I never was über skillful to reach the legendary rank – or bothered leveling to 8, where one can participate in tournaments. The leveling just takes way too much time.

Leveling up enhances the player’s towers, which makes defending much easier. The different cards need to be discovered from certain arenas and also leveled up. This can easily turn into a grind, and unfortunately the difference between levels is quite big, so the grind is pretty much required, unless one wants to dish out some cash – or is a very good tactician.

Every win or loss alters the amount of trophies the player has. The trophies determine the  arena the player has to combat in, so it’s the player’s matchmaking rating.  During my play I saw the arenas from 1 to 5. There are 9 arenas all together, the last one being the special legendary arena. But I saw a lot of opponents that had most likely intentionally dropped down to lower arenas in hopes of getting certain cards or winning easier matches. 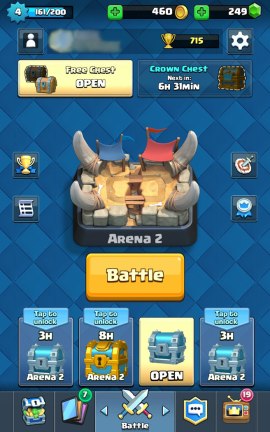 Collecting cards, building the deck, trying out different combos – it’s all fun. But there are a lot of people in the playerbase that enjoy griefing others for example by using super hard cards from higher rankings in lower arenas, or just spamming emotes nonstop. Long winning and losing streaks are also pretty normal, so the game can easily become nerve-wrecking.

I know some people can keep themselves very calm and calculating even in action games, but I’m not one of those people. I’m not throwing my media tablet to the wall or anything, but the frustration often forced me to take one pause after another, until I decided the game had unfortunately turned into a chore instead of being casual fun I initially aimed for.

Even though eventually the game wasn’t really a good match up with me, I still recognise its potential, and the fact that the devs keep balancing the cards as well as creating new content. The game is free and the advertising for micro-payments is pretty discreet (also there are no popup ads for other apps). The most annoying part in Clash Royale are the other players. But I am more of a co-op multiplayer myself anyway.