This is William Atarnus, a young man who just moved into Riverview and aspires to be a renowned acrobat. He is an athletic vegetarian and a cat-person. He’s also pretty gay, like 98 %. And frugal and handy, so he can manage himself even without many resources.

Which he doesn’t have. He’s pretty broke after getting a large plot of land. There’s only 1,3k § left for building a house and living in it.

Somehow the idea of trying to build a small room for shelter seemed like a good idea to start with, but the funds ran out. There William was, with a windowless, unpainted room with a bed and a toilet seat.

He left to look around the town. After visiting library for some knowledge and a park to snatch some veggies, he was able to start a small garden. A rare flower he found even bought him a lamp for the room. Luxury.

In the library he already met a lovely Russian man with beautiful long hair. Unfortunately he was already married with children. As was pretty much everyone else interesting he seemed to meet.

For some reason William had the idea that to become an acrobat, one must have some special skills first. So he took a part-time job in the cemetery while honing his physical skills and looking for acrobat training. Luckily there was a gym very close by, so he could jog there every day to train – and to take free showers.

Pump it, pump it. 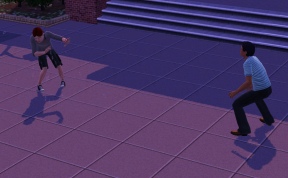 He also met his first friend in the gym. Will was surely hoping for more, but yet again the handsome man he encountered was already taken by some woman.

After searching almost the whole summer for vain, it dawned on him that there was no acrobat training. One just signed up as an acrobat and started performing. What a waste of time had it been roaming among the dead with a lousy pay.

It was autumn, and it was time to start the acrobat career for real. Initially Will just did some mime work in the parks. Looking super hot.

Will didn’t have a lot money but when he found a rat, he needed to splurge on a cage for it. The rat was named Ludwig.

He grew from young adult to adult. Having an exiting birthday party alone in his crappy flat. Even Ludwig had just passed away.

On his birthday, he suddenly got a 10k § bonus from somewhere. No one knows where. Maybe a gift? The money allowed him to build an actual studio apartment now with a lovely double-size bed.

Will tried hitting on tourists too but it didn’t work out perfectly either. There’s also the Russian Yuri with his lovely locks visiting the library once again.

William continued his mime work even in the early snow. During his performances he noticed a cute kid around, and it turned out to be Yuri’s teen-aged son. The guys hit it off and Will started to dream about the day Dimitri would grow up to become an adult.

Later on the winter William got his first real gig. He looked awesome but these outdoor stages really should be kept plowed. Some rude guy also kept talking during his show. Who can chat meaningless things when they could be watching Will’s crotch?

Knife juggling in the snow is my favourite! 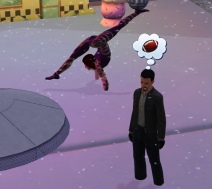 Some douche trying to block the view.

There was another gig, and Will was starting to handle some torch juggling too. He was beginning to gain some fame. 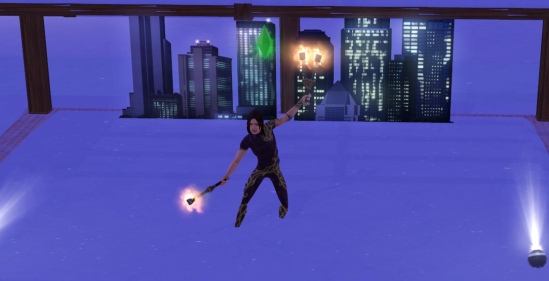 And then there was a burglary. Yeah, Will was already getting along, but why not try to steal from the rich and not from the struggling artists. What a douche.

Next acrobats gig was in the local karaoke bar. When it closed up, Will dropped by the pub next door to have some drinks and open his heart to the bartender. Apparently it wasn’t possible to try to hit on the staff, but it’s not like this bartender really seemed to interested in the first place. What a crappy, lonely life. 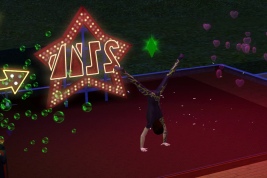 More crotch-play in a karaoke bar.

Next came stalki– visiting Dimitri at his house. A pretty nice place. The guys were friends and Will kept on dreaming about Dimitri’s birthday. 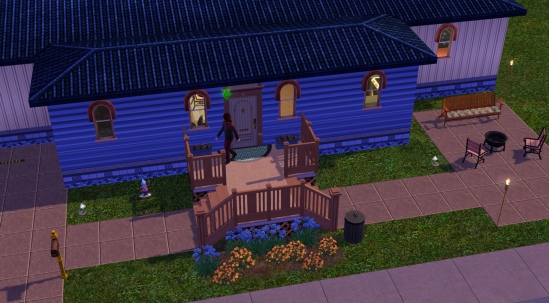 But first Will had to go and handle a couple of gigs he had already booked. For some reason a certain parent-of-the-year lady decided to drop her toddler in the snowy stage in the middle of a fiery acrobat show. Seriously. I hope the kid got adopted by relatives or something. 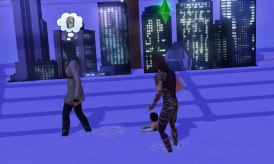 That’s a place to dump your toddler.

Then it was time to call Dimitri over. Will heard that he even had a kid with the floozy of his, and felt discouraged once again, but decided to confront Dimitri once more. And the dude came by with a toddler. Was that the illegitimate child? What was going on?

But Will couldn’t help himself with Dimitri’s allure. They were cuddling on the sofa in front of the toddler like any decent gays should, spreading their gay gas all around. Then Will asked Dimitri to break up with the girl, and start dating him instead. 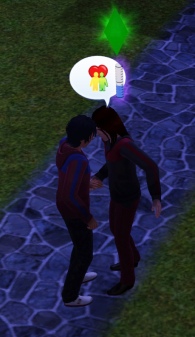 Will you go out with me? 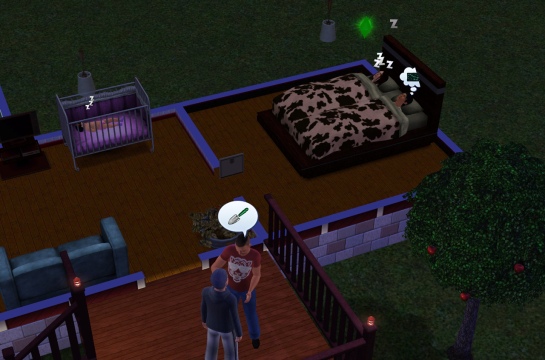 It was getting late so Will had to go and buy a crib for the toddler, so they could stay the night.

In the morning Will decided to propose – in the bathroom, in his pajamas. This might be moving pretty fast, but he had already waited what seemed like forever just for Dimitri to grow up.

To be continued in part 3…

Building a house is pretty cheap, but not that cheap. The optimal start for a broke sim probably would be to just explore the surroundings and get a job.

The money gift bug, or glitch, or intended feature. I didn’t really like getting a random 10k § or so to mess up with my being poor start. I tried googling it, but there was no certainty what causes this or if it’s intentional. Some sims just get weird gifts. Also I wasn’t sure about the amount I got, so I eventually decided to use the money instead of trying to burn it.

I thought acrobatics required a separate skill. I don’t know why and even less I know why I didn’t find it out. Acrobat career is only tied to the athletics stat and job experience. It’s a fun profession though. The shows are rather entertaining, especially when performing with a good looking sim. The two circus-like background songs start to annoy after a while though.

Everyone’s straight and pair up super fast. This might be due to Nraas Storymode. I’m not sure whether sims had actual sexual preferences in the base game, but I remember them being very straight there too. But now it was really painful to try to score a single man from the neighbourhood.