Yet another high school comedy with a dreamy bishounen romantic interest? Well yes. Kaichou wa Maid-sama! delivers pretty much what it promises. It’s filled with funny characters, silly slice of life and high school cliches, and it’s very entertaining if one enjoys it as it is. END_OF_DOCUMENT_TOKEN_TO_BE_REPLACED 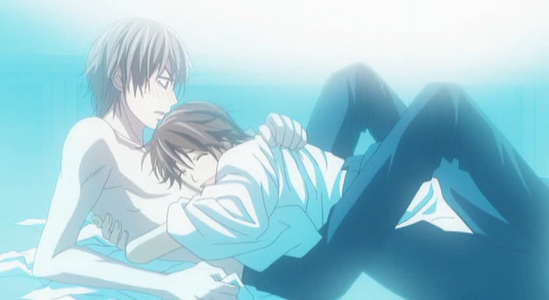 “Everyone” should have heard about Junjou Romantica created by Shungiku Nakamura. It’s the boys’ love 101 title these days. Junjou Romantica anime is currently airing its 3rd season (and I’m watching it) but earlier this year I checked out Hybrid Child which is already the 3rd anime adaptation made from Nakamura’s manga titles. END_OF_DOCUMENT_TOKEN_TO_BE_REPLACED

One of my online friends recommended this title for me as something great and disturbing. It took me a while to dig it up and actually watch it but eventually I did, and because I liked it very much I’ll start my movie reviews with it (it’s already a few weeks or perhaps even months from when I watched it). Perfect Blue would probably be categorized best as a psychological thriller but I haven’t really been using a category like that for games so I’ll go with what I have, maybe I’ll add some categories later on.

On to the actual plot: the movie tells a story about Mima, a Japanese pop idol that leaves her band to start a career as an actress. Some of her fans aren’t happy about the turn of her career, especially when she starts acting some controversial roles. END_OF_DOCUMENT_TOKEN_TO_BE_REPLACED