Final Fantasy XIV – A Realm Reborn is the second MMORPG in the series. I never tried the first one and initially this one gathered quite a bit of critique so I passed on it too. But already some time ago they did a huge overhaul, and now the game is one of the most praised MMOs out there. And I can see why. People also actually play it, even though it has monthly fees that are rather rare these days. Personally I take a monthly fee over broken micro payment system any time, but it is a rather bold choice. Obviously I’d prefer just to buy the game once and be done with payments but that’s even more rare with MMOs.

At first I need to mention a few negative things. They’re all about the free trial, not the game itself. I totally get that free trial will not give you the full experience, but it is plain ridiculous with its restrictions, the worst one being that you cannot invite other people to your party. This basically means that unless your friend is already playing the game, you will not be able to play it together with a friend. It’s also impossible to send tells to people or join a guild. Only way to contact anyone in the game is to add them to your friend-list and physically go near them to talk in /say. Which is of course rather hard when starting the game and not having access to most of the places.

The game has a linkshell system that enables people to talk to the linkshell ring but I haven’t even tried to test it out. Even if we could chat with my spouse, we still couldn’t invite each other to a group so we can rather just chat irl. I don’t care a thing about a player market or level cap or things like that, but how about being able to send tells and invite people from your friend-list at least? Since a friend request needs to be accepted by the other party.

But on to the good things. The game looks great, so I’m going to drown this post with my screenshots. The controls are good, which is rather important for this genre, (though I’ve only played a caster so far.) So many times I’ve given up on an MMO because I just can’t bear the sticky, unresponsive controls. Because you need to do combat in these, there really is no alternative. (Yes, I’ve heard of World of Peacecraft but even I’m not crazy enough to actually go with plans like that when I have kids and my studies.) I am quite sure that FFXIV would actually offer plenty of ways to play the game without going around killing things, but I’m not really into skipping content. And the main storyline is tied to fighting anyway.

A couple of shots of the beautiful world:

The characters are also beautiful. I personally feel that the females are a overall bit too round faced and small but it’s still possible to make a cool looking amazons too. My own characters are of course beautiful guys. I am so pleased that there’s an MMO where you can really make good looking men. Too often the only male character models available are either super bulky or the humour choice.

Even though I favoured kittycats (Miqo’te) and elves (Elezen) here, the “giant” race (Roegadyn) is also very attractive in the game. The new expansion that’s coming out next summer will introduce a draconian race (Au Ra) which also looks really good (the males at least). I never play humans if there is a choice. They’re boring. I am a human, and I am boring.

Roegadyn: (Also, give me her coat) 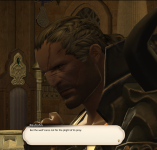 Here’s a couple of boring humans after all. Can I have a cup of twincest? Here it’s also visible how both the NPCs and player characters face each other when targeted. I think those Lalafells (also a playable race) must have some serious neck pains. 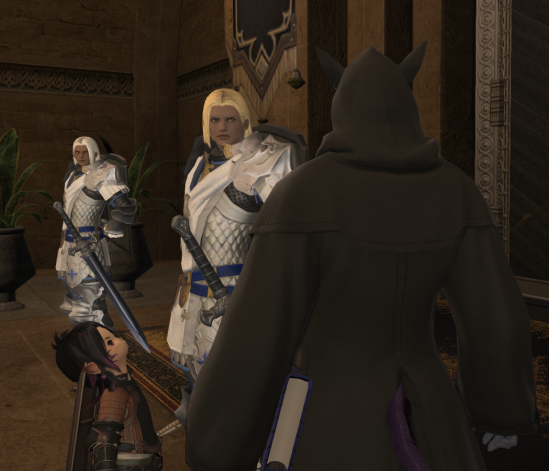 Once your super beautiful character is created, the possibilities are limitless. The game allows you to level each and every class with just one character. At level 30 (which you will not be able to reach in free trial) you can specialize in a job, that requires the full 30 levels of your current class and 15 levels of certain other class. When you level alternative classes, you will be able to use certain skills of them with your current class, creating some flexibility. All class/race combinations seem to be possible.

The starting location is determined by your starting class (the options are three large – and very different – cities). Switching between classes happens with swapping a weapon and even the professions in this game are handled as classes that are leveled up. I haven’t really properly tried them out yet, though. The dungeon roles are the usual tank/healer/dps but there aren’t many chances for dungeon runs in free trial, I still haven’t entered my first one. There are a couple that are available under the level cap at 20, so it is possible to take a peek at them.

The game already has a larger-than-life plot developing with its main quest line – as it should. A lot of the normal quests are rather regular ‘kill this, gather that’ but it all goes very smoothly. Leveling is pretty easy with all kinds of extra quests and ‘fates’ that are these small combat events happening all over the map. Also, autoloot. I cannot express how much I love it. I don’t need to click a thing, everything just pops into my inventory automatically. I’m in awe. And you wont run out of space, at least not in a long time. I haven’t even checked all the things I have in there. Gear and quest items go to separate “bags” so it hasn’t been necessary to sort out any of the stuff I have. Most of it is probably crafting materials etc.

There’s plenty of fan service, the most prominent ones being the chocobos and moogles. The former are naturally the mounts in the game, working also as taxi stops. The latter handle the mail – obviously. I’ve already seen a bunch of non combat pets around (got 3 myself) and who knows what else is there, I’ve only seen a glimpse so far. Emotes are also very much present in the game. There’s a bunch of them and you can even drag them to your action bars. Many quests use them and there are quests to learn more. Fun stuff like this managed to be charming most of the time.

And it wouldn’t be a Final Fantasy without some cool bad guys. So evil. I usually end up liking the villains more than the heroes, will see if it’s any different here.

And some humour in the form of Lalafell thaumaturges being extremely intimidating. These types of small side conversations are happening all around.

The game UI is pretty nice and you can move everything around rather freely, so it’s a breeze playing even without addons. My UI has been already customized a bit at this point so it’s not the initial one: 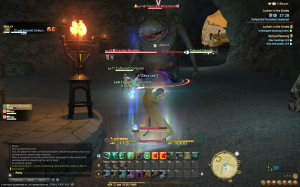 That’s it. I still have a few days left of my 2 week trial and will keep playing. Then I will probably take a small break to finish the other games I was currently playing. And try to catch a discount from the actual game. It’s only 10 euros but the CE would have some cutesy things I obviously cannot live without.

Me on Other Sites

Throw the Pie at the Yeti!

A Tribute to the Era When Games Actively Hated Game Players

What will emerge the victor?

Moths to a Flame

A collection of mis-adventures

My Journey Through The World Of Anime (and other topics, occasionally)